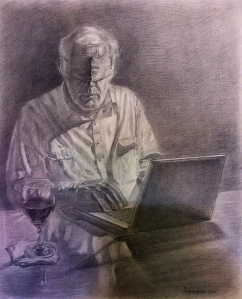 Nicholas Clark Asheshov is an English journalist, explorer, and businessman who has spent most of his life in Latin America, mainly in Peru.

Born in London, Ontario on September 3 1939, Nick is the eldest of four children born to Dr. Igor Nicholas Asheshov (b. Nizni-Novgorod, 1891) and mother, Dr. Rosa Olive Jane Clark (b. London, England, 1904) and spent his early childhood in Canada.

The Asheshovs returned to England in 1948 and, after prep schools in London and Sussex, Nick was educated at Haileybury & I.S.C (1953-57).

He was awarded an Exhibition (scholarship) to King’s College, Cambridge where he read Social Anthropology (1958-61) under Sir Edmund Leach and Prof Meyer Fortes. He became an M.A. (Cantab) in1965.

Nick led the Cambridge Expedition to Peru in 1961 and, after conducting research in the Andes with Cornell University on the Vicos project, became chief reporter with the Andean Air Mail & Peruvian Times (1962-63), traveling extensively in the Uccayali, Huallaga, and Urubamba areas.

In 1964-65 he travelled in West Africa and was for a year in Johannesburg on The Sunday Times and with the Associated Press. From 1966-68 he was a features writer for the Daily Sketch, which later merged into the Daily Mail.

In 1968 he returned to Lima to become Editor of the AAM & Peruvian Times(founded 1909). He was also the stringer for the Financial Times, The Daily Telegraph and The Sunday Times.

The Peruvian Times was shut down by the police in 1974-75, during which time Nick was mostly in exile in Buenos Aires. A magazine, Futuro he had set up with Manuel Ulloa and Enrique Zileri was truncated by the military coup in Argentina of 1976, but by then things in Peru had eased and Nick returned to Lima to set up The Andean Report and The Lima Times.

The Andean Report became the leading financial publication in Lima until the elections of 1980 and continued successfully for another decade. Meanwhile Nick had become Latin America Editor for Institutional Investor, New York, where he published a score of reports from all over South America focused on the debt explosions and implosions of the 1970s and 1980s with reports from Mexico, Nicaragua, Costa Rica, Panama, Venezuela, Colombia, Peru, Bolivia, Chile, Brazil, Venezuela and Argentina.

In 1988 Nick was awarded the Moors Cabot Gold Medal by Columbia University for outstanding reporting on Latin America and the Caribbean, and in 1989 he moved to Santiago where he set up The South Pacific Mail. In 1993 he published The Chile Business Handbook and in 1994, back in Lima, The Peru Business Handbook.

Nick has been a regular contributor and columnist for Caretas, Lima with dispatches from Chile, Argentina and, notably from the wars in Nicaragua and El Salvador (1978-82), where he was also a correspondent for The Sunday Times and the Daily Mail.

Nick’s years as a foreign correspondent and business reporter were punctuated by dozens of exploratory and other journeys into the Andes and the Western Amazon:

He was a member of the NGS’s 1963 Vilcabamba Expedition (see Peru by Parachute National Geographic, Aug 1964). The map of this then-uncharted region contains a dotted line described in the key as Asheshov’s Route.

In 1970, he was a member of the Ridgway Amazon Expedition, which located definitively the source of the Amazon. (See Amazon Journey, John Ridgway.)

Shortly afterwards he led expeditions into the Madre de Dios in 1971 to find his friend Robert Nichols, chief reporter of the Peruvian Times, who had set out with a couple of French explorers in search of the lost city, Paititi, El Dorado, but who had, it transpired, been stoned to death by the Machiguenga.

In 1973 he panned for gold in the Rio Colorado, Madre de Dios. (See The Gold in the River, by Anna Asheshov: Hodder & Stoughton.)

In 1987 he crossed into the Shining Path’s Red Zone between the rios Apurimac and Urubamba, extracted a 6-year-old orphan, and took her to a new life in Scotland (See: LA Times,  By William D. Montalbano, and The Road to Elizabeth, John Ridgway).

Since the late 1990s Nick has travelled in the Cordillera Urubamba, the Valle Mapacho and in the Vilcabamba between the rios Urubamba and Apurimac,

He participated in 2001 with Gary Ziegler and Hugh Thomson in the discovery of Llactapata, a previously “lost city” behind Machu Picchu. (See The White Rock and Cochineal Red  by Hugh Thomson – Weidenfeld & Nicolson.)

Currently Nick is a member of the Bocas del Toro Yacht Club in Panama and has sailed in the Chiloé Archipelago on his yacht The Snail.

Much of Nick’s business activity has centred around news publications. He was a partner in the AAM & Peruvian Times SA and was owner with Juan de Onis and Roberto de Andraca of The South Pacific Mail.

In 1995 he bought a derelict hotel in Urubamba from the government –a 12-hectare property on the bank of the Rio Vilcanota– and went on to sell it to the Libertador Group in 2005.

In 2001 he founded The Sacred Valley Railway and ran a daily train service between Urubamba and Machu Picchu.

He founded The Andean Railways Corp. in 2007, which challenged and eventually ended the Orient Express monopoly on the Machu Picchu line.

He was Chairman of the Executive Committee of Andean Railways Corp., which runs the Machu Picchu Train until 2013.

Nick lives at The Station House, Avenida Ferrocarril, Urubamba with his wife Maria del Carmen Leiva, whom he met in El Salvador in 1980 while covering the war there for The New York Times, the Daily Mail, and Caretas. Their children are William (1990), Manchester University, and Tanya (1992), Martin Escuela de Bellas Arte, Santiago.

His sisters, Anna Asheshov and Katherine Paul, both live in England, as did Tanya, who died more than a decade ago.

Ed: Nick, I noticed you did not mention in your biography that you are almost totally blind, and have been losing your vision for 40 years.

Nick: Oh, you noticed that, did you….Well, yes…  It’s not that it’s entirely irrelevant … It’s just that I didn’t quite know how to fit it in.

(Conversation with the author in January, 2012)