If you are someone’s compadre or comadre you should note that this year el Dia del Compadre is Thursday week February 12 and that the Dia de la Comadre is February 19. Out here in the campo we celebrate them, in my case cautiously, as an entree to Carnavales.

Most people are multiple compadres. I have at least two-score myself, counting those who are padrinos of my own children as well as those where I myself am the padrino. Every wedding produces another crop, one for the civil ceremony and another lot for the church, as does primera comunion. If each Peruvian adult has, say, just 10 of these relationships, that means around 150mn compadre relationships. Perhaps a Peruvian could register himself in the Guiness Book of Records as the world’s numero uno compadre.

Of most of my compadres and ahijados I am fond and proud. One ahijado, Jhon Acurrio Caytuiro, the son of a prominent Urubamba market mamacha, got onto the front pages of the Cuzco papers by winning first place on the entry list into the Universidad Nacional San Antonio Abad, the first time apparently that a lad from the outlying provinces had achieved this. He got into the Computer Science faculty and had done his secondary schooling at an agricultural school run by Spanish hermanos up the road in Yucay.

Another ahijado, Rene Huilca, started life at 3,600ms asl 24 years ago in a cold Quechua valley and I ran into him just this morning driving a station-wagon taxi, right up there with thousands of university graduates all round the world, on the Urubamba-Cusco route. He worked his way through secondary school in Cuzco as a cobrador on micros. He is a courteous live-wire for whom I was able to do my duty and give him, plus a sister, a job a few years ago, both of them honest, smart and bi-lingual.

Their father, my compadre Melchior Huilca tells funny stories in Quechua –you know they’re funny because he giggles all the way through them– and lives up beneath one of the Veronica massif glaciers fighting off pumas and rustlers among the crags and waterfalls. Once Melchior and I went to the foot of the glacier to buy a couple of llamas one of the costs of which was that I should become compadres with the owner who lived in a small circular stone and ichu-thatch hut at over 4,300ms asl.

On the way down a steep slippery path one of the llamas lay down and refused to budge. When camels do this you’re supposed, of course, to light a fire under them. Instead, Melchior just grabbed the animal by its ankles and, incredibly, slung it over his shoulders in a fireman’s lift and continued stolidly all the way down to our truck.

In Tarija, Bolivia’s most charming region, the compadre/compadre days see exchanges of cakes, turkeys, sheep and liquor, emphasizing what they call there the “parentesco espiritual” which is the essence of the southern European tradition of compadrazgo.

For getting married, having compadres de la boda is a legal requirement, both for the civil and for the church. Once my wife and I were dragooned into being the compadres for a shotgun marriage between the son of an already-comadre and a local girl who had just had a baby with the son. For some reason it all had to be done there and then, so we had a word with the alcalde and we had to spend the evening listening to a tinny recording of the Blue Danube, everybody making forced smiles at each other while we signed the papers.

There is a lot of US anthropology literature on compadrazgo, a key aspect of campesino culture well beyond the Andes, Alejandro Camino, the anthropologist, told me when he contacted me the other day. “The idea is to extend your reciprocity relations by establishing artificial kin ties, creating strong bonds and obligations.

“The word in Quechua for “poor” is huaccha –orphan; ‘Kin’ links is what makes you richer, from San Isidro to Cerro de Pasco to Urubamba.”

He went on like this for a bit more, emphasizing what a good deal it was to be a compadre.

“Ah yes,” he said eventually, clearly coming to the point, “I want you to be the padrino for the primera piedra of my new house.”

Published in Spanish in Caretas the week of January 28, 2009 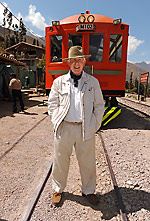